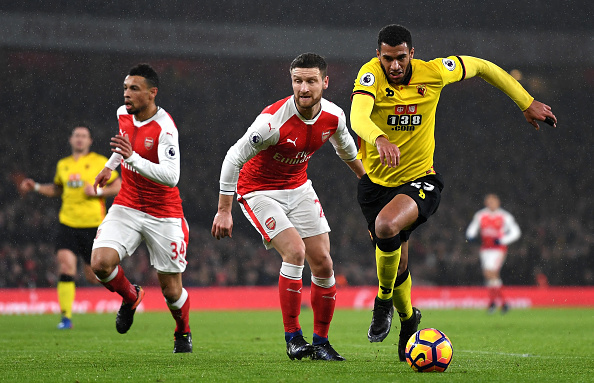 The Arsenal fans have made their frustration clear after Tuesday night’s unexpected result against Watford at home.

Arsene Wenger’s men followed up the 5-0 thrashing of Southampton in the FA Cup by losing 2-1 at home to the Hornets.

Shkodran Mustafi was the only player to retain his place in the starting eleven from Saturday and he had an evening to forget on Tuesday.

After the Gunners’ failure to put together a comeback following Watford’s stunning start which saw them go 2-0 ahead after 14 minutes, Mustafi has now lost his first game in an Arsenal shirt.

Still trying to understand how Mustafi got destroyed 1v1 by Capoue shifting to his left. No guile, no trickery, yet SM was exposed badly…

Mustafi's unbeaten run included PSG, Spurs, United & Chelsea but he'll lose his record against Watford at home, the most Arsenal thing ever

Mustafi almost lost it with the ref. The reason? Not the ref-he had an average game. No, it was Mustafi's frustration with his team mates