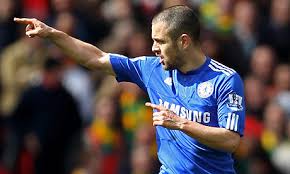 The 28-year-old is in search for a new club after refusing to stay with Chelsea following the expiration of his contract at Stamford Bridge.

Cole’s suitors have been deemed to be Manchester United, Arsenal, Tottenham and Manchester City.

But Alex Ferguson’s side have reportedly dropped their interest in the midfielder while Man. City’s pursuit of James Milner has left Spurs and Arsenal to battle over Cole’s signature.

Spurs boss Harry Redknapp has reiterated that he feels the former West Ham boy might have clinched a move elsewhere and is unlikely to make a switch to White Hart Lane – leaving Arsenal as favourites to land Joe Cole.

Indeed, the Gunners have been front-runners to sign Cole ever since the summer began, but the player’s involvement in the World Cup meant any move had to be put on hold.

A decision from Cole over his future was expected to be made only after England’s participation at the World Cup and with the ‘three lions’ bowing out of the tournament to Germany today, we may soon learn whom the 28-year-old will be playing for next season.

« Van Persie makes it double for Arsenal
Cole: ‘My phone has been turned off but now I want to sort it all out’ »