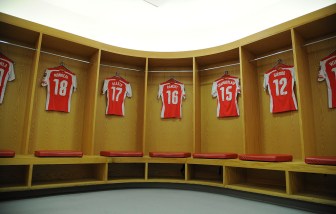 Promising Arsenal prospect Isaac Hayden has revealed that he had to decide between the Gunners and Manchester United before moving to north London.

Hayden will be spending this term at Hull City on a season-long loan but the youngster has not lost his commitment to Arsenal.

“I was 14 when I joined Arsenal. I’d been at Southend before from the age of under-10s,” said Hayden.

“We played Arsenal in a friendly at under-13s and they said they’d take me.

“They were my team growing up because my idol was Patrick Vieira. I always watched his game and studied what he did.

A versatile player, Hayden – who made his Arsenal debut in 2013 – can be deployed at either centre-back or defensive midfield.

But the 20-year-old has revealed that one of Arsenal’s biggest rivals once asked for his signature before he rejected them to work under Arsene Wenger.

“As soon as I got the nod, and the choice between Manchester United and Arsenal, it was an easy decision. I said ‘Drive me there now!’ as soon as I knew they were interested. It felt like a once in a lifetime opportunity.

“Manchester United were keen but when you’re 13 and living in London with your parents, it was a no brainer.”

The Englishman is one of several to turn down United for Arsenal after Aaron Ramsey did so in 2008 after leaving Cardiff City.