‘Dudu’ on his way back, Persie can’t wait

If anyone had the guts to forecast a return to football for Eduardo da Silva in the same year he endured that potential career wreck at Birmingham in February, it would seem very dubious.

Well, not anymore has Eduardo’s comeback been believed sideways since he started a very progressive rehabilitation in his native Brazil. Since then, that day he will receive a massive ovation at the Emirates Stadium for his courage of resuming his career again, has drawn closer and closer.

Better is the declaration by Arsene Wenger yesterday that the Brazilian-born Croatian is three minimum weeks away from a heroic return.

Wenger did clarify that Eduardo will NOT be thrown out there so easily after suffering that horrible fracture to his fibula and dislocated ankle.

“What I mean by competitive football is joining in completely with a normal training session.

“After that he has to come back to match-fitness – but he is ahead of where we expected him to be and that is fantastic news.” 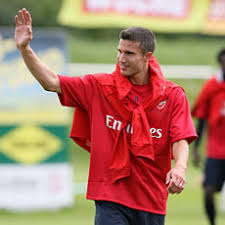 That will be mid-November according to calculations and his teammate and fellow left-footed striker Robin van Persie is as anxious.

The Dutchman went on to acknowledge Eduardo’s significance to Arsenal’s now deep but sometimes thin squad.

“We were all really unhappy with what happened but I think he dealt with it really well and showed a lot of maturity. If you look at his finishing record, we need him.”